This weekend was Arisia, a Boston-area science fiction convention which I have attended from a very young age, mostly because my family has done the Arisia historical dance for that long. This year the theme was "Malice in Wonderland." Actually, this theme choice had much less to do with the upcoming Tim Burton movie than it had to do with my general love of Alice in Wonderland and the fact that they were pushing for a goth-friendly theme last year. I think we've been doing a good job of accidentally choosing perfect themes, like the Labyrinth Ball on an anniversary of its release (which we did not even realize until afterwards), and of couse last year's wildly popular Steampunk Ball.

I didn't sew anything for myself for the ball, but I did make a really neat outfit for my little sister. She showed me a picture of an anime Queen of Hearts, and I've always toyed with the idea of a stand-up heart collar sort of thing. Mother found a bolt of red fabric in the sewing room, and we went for it. I made her a corset, bolero jacket, and stand-up heart (with buckram and wire supports). She made a crown and scepter with sparkly red hearts we found on sale at Joann Fabrics, on clearance for Valentines day, and added in what I would call a very pretty black Lip-Service japanese-lolita-inspired skirt. It was a very good look. 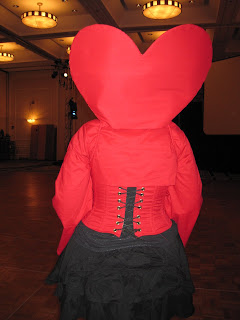 I liked the back! But here is the front too... 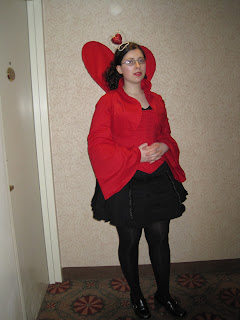 I may not have gotten new clothes for the ball, but we also ran a "Steampunk Elevenses" event. We like the rotating themes for the balls, but the Steampunk ball went over so well before that we wanted to do something Steampunk. Anyway, we ran out of hot tea water from the hotel, but I made about 300 scones, so we didn't run out of those. I made a new Edwardian corset out of upholstery vinyl that looks somewhat like tooled leather. Very neat. I also made (well, mother did a lot of the work on this one in the final analysis) a really really really cool skirt with a train and ruffles. Again, this was a stray bolt of fabric from the sewing room. I love the stripes! This is my new favorite skirt (and favorite new skirt?), even though it needs more ruffles to be officially finished. 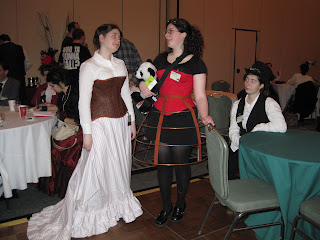 And for one more Arisia costuming moment, I did a brief smallsword demo with the Higgins Armory. This time I threw my new wig into the mix! I bought it from SweetHayseed (she has an etsy and wordpress, and does custom orders) at the Dances of Vice event where I was performing. It is so neat! So there I am looking snazzy. 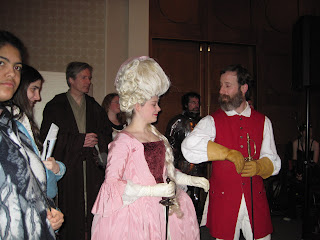 Other than that, the weekend included lots of fun things and fun people, an adventure in being a judge's clerk for the Masquerade, a fun concert with pirates and an alligator tango, plenty of strange overheard conversations, and an all night residence in the consuite chatting with nice people. All in all, a successful weekend of looking good.
Posted by Antonia Pugliese at 5:00 PM