What is Swans' Down, Exactly?

I have recently been obsessed with items of clothing or accessories trimmed with swans' down, and I have been inspired to make some items like that. In the comments section (which I always read and sometimes actually reply to), I was asked how I'd do this. Would I use marabou boas, or actually fluffly little bits of down? How do you handle such tiny feathers? Well, this is a great question, because I really should explain what swans down is! Let us start in the 19th century, and use my favorite source for fashion matters - Godey's Magazine. I found an 1855 article called "Furs for the Ladies; and Where They Come From." While this article is mostly about furs, it includes this line:

"Substitutes for fur have been found in the plumage of birds. Thus, swan' s-down, goose-down, egret-down, and the silvery plumage of the grebe, are convertible to ladies' use. The down from the egret is so costly, that only four sets have been made during a century, the last having been fabricated in Paris for the great Exhibition in Hyde Park."
Add to this the fact that I've found references to using down of different widths, and you can probably guess that they don't mean boas. In fact, I believe that swans down is a lot more like fur, where the hairs are still attached to the animal skin, except this time we're talking about feathers still attached to the bird skin. So here you have garments trimmed with only a band of down, probably cut in strips from a larger bird pelt... 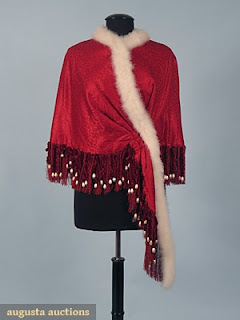 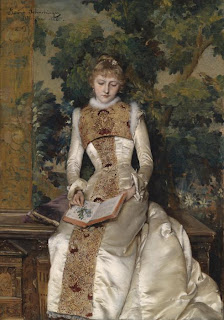 But you could also use a wide piece of down to make an entire muff! 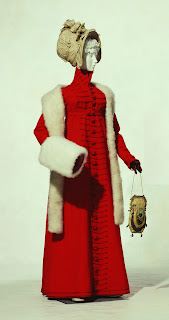 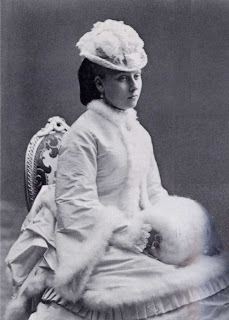 And here are two pink coats and one cape, trimmed with varying widths of down. 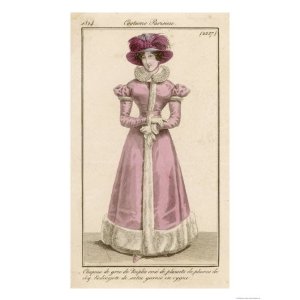 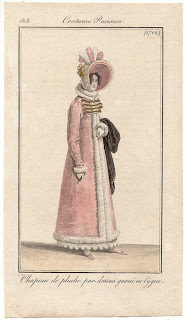 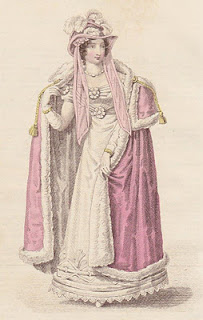 Now, for all practical applications, I have no intention of skinning swans. Marabou boas are made from tiny down feathers, though I think they come from turkeys (it is certainly not swans). They are easy to find, cheap to procure, and convenient to sew on to garments. So I am personally sticking to the boa approach for my faux-swan's down, but it is good to know what you are mimicking!
Posted by Antonia Pugliese at 2:41 PM