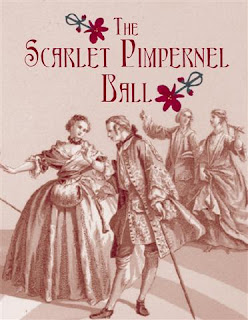 They seek him here, they seek him there, those Frenchies seek him everywhere – but if they really want to find him, they should be searching in Cambridge at the Scarlet Pimpernel Ball. Join us for a glorious mash-up of regency and ragtime eras, celebrating the French Revolution setting of Baroness Orczy’s early twentieth century novel. Dances will be drawn from both eras, so expect romantic waltzes, bouncy one-steps, and sprightly country dances. Likewise, costumes may range from foppish regency tailcoats to Gatsby-esque suits, from elaborate powdered wigs to sleek bobs, and from ragtime ballgowns to angry peasant clothing. Intrigue, adventure, and dancing! This is a job for the Scarlet Pimpernel!

Register now at http://www.vintagedancers.org/2011pimpernel.html to avoid the $5 at-the-door surcharge!
Posted by Antonia Pugliese at 2:59 PM