Oh, did I forget to mention that I was going to Vienna? That's what I get for being too busy! Anyway, Mother was invited to teach at dance historian Hannelore Unfried's fantastic dance week in Vienna, Austria, and I am here to help her. Apparently every February all the people of Vienna go on vacation for the same week, and while they are all off skiing or traveling Hannelore holds her wonderful vintage dance week in the semi-deserted city. This is Mother's fifth time attending, and my third, and Julia is with us though I cannot recall how many times she has been. Right now it is 6:50 in the morning in Vienna, so they are sleeping and I cannot ask, but it is also 12:50 AM in Boston. I don't know what time will show at the bottom of this blog post, then. Anyway, stay tuned for rather better stories about Vienna and the dance week, but as of this morning I can only tell you about traveling yesterday.
Yesterday was about a million hours long. We got packed and on an evening plane in Boston, flew over to England, then changed in Heathrow to a flight for Vienna. By the time we went to sleep early in the evening in Vienna, I'd been up all night in America. At least now I'm on an early-bird-but-not-out-of-the-realm-of-possibility schedule for here. Traveling is so complicated! Anyway, my first important observation that I hoped to share is this: 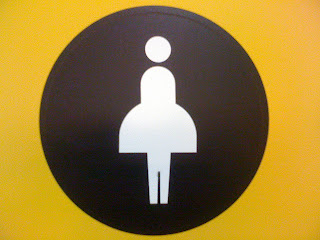 Apparently, women in England wear much cuter skirts than those in America, where all the bathroom gender indicators wear ugly triangles. I much prefer the cute bell-shaped poof of a skirt. Of course, I guess the other possibility is that British women have plump bottoms. Or that the airport is just trying to be interesting (which conclusion the square toilets and retro-futuristic shuttle all conspire to support). But I think I will maintain that it is a statement on fashion.

My second observation is that traveling is terrifying. We got to Vienna and pulled two bags off the conveyor belt (because they were our bags, you know!). Then we waited for the third. And continued waiting. Then as we watched the abandoned broken-off wheel of what was once a rolling red suitcase go by for the third time, we realized that our bag was gone! At which point I started calculating exactly how many hours of sewing that bag represented, containing six ballgowns and three day dresses, plus underwear. EEK! Eventually they tracked down the bag, waiting in Heathrow for the next flight to Vienna. It should be on its way to us soon, so all is well.

My third observation is that Krapfen are magical. Upon arrival, we decided that we could not rest until we had our Krapfen for the day, because you haven't experienced Vienna until you've eaten Krapfen. They are basically just donuts, which in a world of Viennese pastry may not seem special at all, but I assure you they are. The key is that instead of being filled with a sickly sweet red jelly that could belong to any number of berries, Krapfen are filled with the most wonderful, tangy, and delicately sweet apricot filling. Delicious! Apricots are a Vienna thing, and Krapfen filled with tasty apricots are the best! These ones came from Aida, a chain of bakeries around the city, but we'll have plenty more I promise. 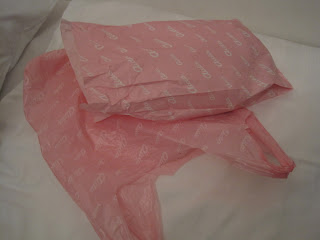 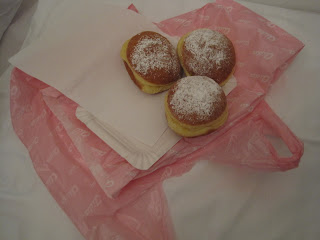 Posted by Antonia Pugliese at 2:07 AM