It's been a rough few months (year? year plus?) for me for sewing. But I've been doing a lot of vintage knitting! Occasionally, I will even finish a project. And here is project I'm pretty crazy proud of - a reproduction of a designer 1920s sweater. And because this post ended up being so long, here's a quick picture in case you don't make it any further.
Elsa Schiaparelli was a fashion designer in the 1920s-1950s. She was a rival of Coco Chanel, and a protege of Paul Poiret. You may have seen her weird shoe hats, or crazy hand motifs. 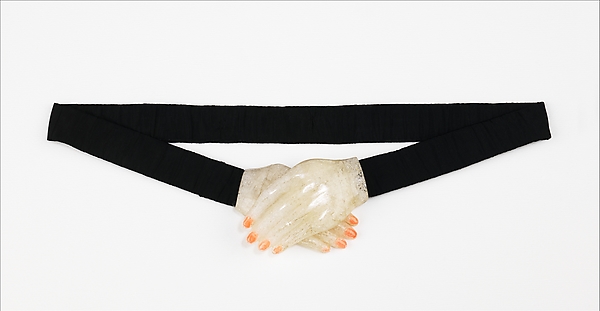 But it was her trompe l'oeil sweater designs that launched her successful career in 1927, and this sweater in particular is the one that started it all.

So what was revolutionary about this sweater? First of all, there's the really cool, slightly surrealist, optical illusion of the bow and collar on the sweater. Apparently Schiaparelli wore it to a society luncheon and immediately started getting orders for more (according to the V&A write-up). It is also constructed in an interesting way - made with a technique called Armenian knitting. If you don't knit, there are a few ways of incorporating more than one color into knitting. I give you permission to skip this paragraph if you don't want the explination, though. One method is called intarsia, where you switch from one yarn to another. You can make blocks of color, but you have to keep a lot of threads going, and you get a finished product that's one thickness all around. Another technique is fair isle, where you carry the yarn you aren't using along behind the one that shows, so you can switch back and forth between the two colors frequently. This gives you an extra thick fabric and intricate looking patterns, but you can't make big swaths of a single color or you end up with long "floats" of the disused color on the inside, which will snag and ruin your tension. Armenian knitting is like fair isle, where you carry the yarn that isn't showing across the back of the work, but every third stitch you catch it in the stitch you make with the active color. This allows you to make longer patches of one color, more like you'd traditionally use intarsia to accomplish, but you get an extra thick fabric with a great tweedy, heathered effect as the non-active yarn peeks through ever so slightly. Check out the inside of the neck, which you can see in the picture of the sweater lying flat. That area of the sweater is white on the good side, so the black thread is showing on the inside, but it is caught by the white every few stitches. Armenian knitting!

The story goes that Schiaparelli saw an Armenian woman walking down the street in a sweater that had a "steady look," which came from the extra thickness and stability of this technique. If you imagine the 1920s, sweaters were a sporty and newly popular item for women's wear, but apparently they had a problem holding their shape. The combination of this special knitting technique and Schiaparelli's snazzy trompe l'oeil bow made this sweater unlike anything else that was available. It is an iconic 1920s fashion revolution. (https://www.philamuseum.org/doc_downloads/education/ex_resources/schiaparelli.pdf)

And now that you understand the importance of this sweater, here is mine!
Honesty time. This sweater is not 100% finished. I wore this to a tweed ride, and I was running late. The sleeves are just basted in (and my sleeves turned out a little too long, and rather than re-knit them I just decided to set them in extra high to get rid of the excess, but I really need to do it carefully and well when I have more time). Also I didn't block it at all, which will probably help with the way the bottom edge flips up. It has a couple rows of crochet to edge it, or the Armenian stockinette would just roll up, but blocking will help finish the job. BUT I WORE IT SO I WIN. Some day I will finish it and wear it again, and then I can take more pictures! But you get the idea.

So, what do you think? And do you want your own? Good news - you can do it!

If you can knit, this is the pattern I used:
http://reelknitting.typepad.com/index/2009/06/free-pattern-the-schiaparelli-bowknot-sweater.html
Have at it. The good news is that the chart is fantastic, and I'm really pleased with how the bow looks. This is not just a Schiaparelli-like sweater, this is recognizable as a reproduction. A copy. Unquestionably 1920s. The bad news is that it's only for a 34 inch bust, which I am not, and it calls for expensive yarn that I didn't want to source from the UK. For my sweater, I compromised and used the chart, but ignored the instructions. I wanted to use real wool (rather than acrylic or something), because I thought it might matter in terms of how the front and back threads interact, because wool is less slippery. Also there's something legitimate about using real wool. That doesn't mean I used expensive wool, though - just cheap Patons from Michaels. I tried to find more serious yarn, but had trouble finding anything in an appropriate gauge, in both black and white, that wouldn't cost well over $100 to finish the sweater. And in the end, I used a lot - I wish I'd kept track, but I think I needed 6 skeins of black and 5 of white? This is a HEAVY sweater. It's big (in what I hope is a shapeless hanging 1920s way), and it's heavy (in a 2 layers thick, wear this sweater on cold days and skip the coat way).

In terms of process, I started by knitting a healthy swatch for gauge (a few times on different sizes of needles - I ended up using a size 8), then did the math to make sure it would go around my bust. Since I wanted a 1920s, sort of shapeless and straight looking sweater (if it weren't for the 1920s I'd rather have something more fitted and curvy) I aimed big. I used worsted weight yarn, even though the pattern definitely called for something finer. I'm sure the originals were made with something finer, but I also think that they were made with many more stitches per inch. So I don't recommend doing that unless you want to re-graph the whole pattern to make it human sized again. That's more work than I wanted to do. The Armenian knitting technique grew on me, and it was important to me to try it because it is such a critical part of what makes this sweater special in its historical context. But it was kind of a pain, and if you know intarsia I wouldn't fault you for using the chart to do that instead.

Besides, if I were going to do the work of charting a design, I'd make this one. Because it is my favorite! Isn't it gorgeous? Oh, I hope I make it someday...
If you don't knit (and don't want to learn on this project, which would probably be wise), you can check out this tutorial for a faux Schiaparelli sweater. It's just a matter of stenciling and painting a bow onto an existing sweater, so no knitting is required!
http://www.rookiemag.com/2012/09/how-to-fake-your-own-schiaparelli-sweater/

Or if you're not feeling crafty at all, shop carefully and you just might find a perfect sweater anyway. This is an iconic sweater from fashion history, and it still inspires designers today. I keep seeing this one, by J Crew, turn up on ebay! 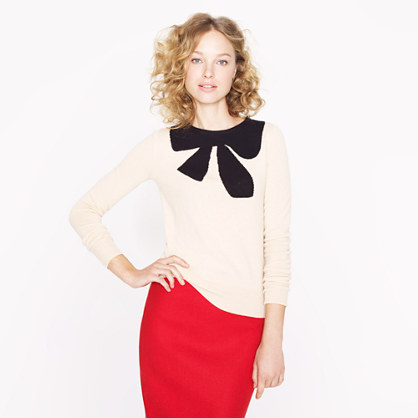 And this is one of my favorite things about this sweater. It might be a little odd if you make one and we happen show up to the same event in them, sure, but this was an early piece of semi-mass-produced clothing. There are original Worth dresses in museums that I'd kill to wear and love to copy exactly, but I'd always feel a little odd wearing them, because they were one of a kind and mine isn't the one. Don't get me wrong, if you make exact copies of museum-owned dresses that's super cool. But if I lived in the 1920s, I could (maybe sorta if I was lucky) have bought one of Elsa Schiaparelli's sweaters. There wasn't one sweater for a fashion show or a particular rich client, there were dozens made to sell. So making my own now and wearing it to 1920s events just feels right to me, somehow. If I can stand the heat, anyway, because it turned out to be so warm!
Posted by Antonia Pugliese at 3:44 PM