Fair warning: Today will be a wordy and philosophical post. Also, I owe you pictures of my new dress at the Nahant Ball, but due to some technical difficulties (my camera is lost, the cord for mother's camera is lost...), I will have to continue to owe them.

A while ago I read a wonderful letter written by Ellen Tucker Emerson to her mother. I am familiar with the Emersons from my days of working at museums in Concord, but the fun part of this letter is what she says about the polka. Here is the letter as a whole, but part about the polka is bold if you want to skip the irrelevant bits:

It is rather late now so I can write only a little. Yesterday William [Emerson] and I went to call on Kitty Cobb, but she and her sister were out, and Mrs Cobb unable to see company. William is to leave Cambridge finally, in a week or two, and set himself up as a N. Y. lawyer. I was so surprised when he told me that he had to tell me once or twice that he wasn't a baby. Sunday night I went to Mrs Ward's to dinner and to spend the evening. Mrs Agassiz's mother and sisters were there, Mrs Hooper and Anna, Mr and Miss Huntington and Mr Drezel. Miss Sally Cary sang. Miss Emma Cary talked to Anna Ward and me about school. Mr Drezel played. Anna Hooper looked very pretty and talked to me a little while. And altogether it was very pleasant, only I was sleepy. Yesterday was dancing-school night. I enjoyed it wonderful to tell. I felt more like it than before and besides, Mother, there was another Washburn there! Ellen Washburn, exactly as lively and kind, almost as pretty, and with even more jump than Lizzy. She took care of me a good deal and when I danced with her I was surprised to find how difficult it seemed for her to keep on the floor, she seemed all the time in the air and only came down to jump up again. Lotty Hemenway was there too with her favorite Susy Minns, a very nice girl who danced with me once. But I did one thing that spoiled the evening. I don't dance the polka with boys, neither do most of the other girls. There was a polka going on and a man came up and asked me to dance. I forgot that it was polka, I didn't think at all about anything, but I just came down onto the floor and the man took hold of me. Then alas! I remembered that it was polka. Oh sorrow I felt so frightened and all round the room I considered all the vexatious consequences of a little forgetfulness, till when I was set down I ran right to Mrs Washburn and asked what I should do. She said I had better keep out of the way of gentlemen in polka-time that night and the next night it would be forgotten, nearly, and I could say as before that I didn't dance with boys. But for all that I keep feeling so bad about it. I must tell Mrs Ward and see what she says before I am comforted. Good-night. Don't work too hard Mother dear, and never do anything in the evening but enjoy yourself with the children.

Isn't that interesting? I was reminded of this letter because I was talking to a vintage dancer who was complaining about people who use bits and pieces of "Victorian Etiquette" out of context, then complain that it doesn't work. Specifically, we were discussing the issue of the whole "a woman can never refuse a dance" myth. In fact, a woman should not refuse dance partners, unless she has a good reason. But she should if she has a good reason! Here is my break down of what constitutes a "good reason" historically, and how to apply it to the modern ballroom.

1) This is mostly a modern concern, but a lady may certainly refuse a dance with someone who is not behaving like a gentleman. So if a gentleman is harassing you or monopolizing you, you may absolutely say no. This is not being modern and icky, ignoring real rules of etiquette - this is being reasonable. They would have been just as reasonable (or perhaps harsher on him) in period. It is unfortunate that this comes up more often in the modern world, where men may not know how to behave like gentlemen. But you need not hold yourself to a rigid level of etiquette if you are dealing with someone who does not do the same. The "women not turning down dances" part of the equation only works if the rest of the system is functioning too, where men obey the social standards of that time period. So stop complaining about not being allowed to turn down obnoxious partners!

2) Period etiquette manuals give women permission to turn down dances with good (or only ok) reason. The key here is consistency. If a gentleman asks you to dance, the manuals give you permission to say no on the grounds of fatigue, or even of "fear of fatigue." I love that phrase. Once you have said that, though, you must sit that dance out... it is unacceptable to say you are too tired do dance with one person, then be seen doing that dance with someone else. Of course, more dramatic good reasons also are acceptable. I would certainly take "I can't dance with you because I am feeling violently ill and must leave" or "I can't dance with you because my skirt has ripped off and I have to go McGuyver an outfit for the rest of the ball." But I expect you to go to the ladies room and fix your skirt, not dance half naked with someone else. Seriously. And yes, I have seen a skirt get stepped on and then ripped practically off.

3) As Ellen Emerson showed us, you can even refuse dances as a matter of policy, as long as the policy is consistent. That is why she makes such a fuss about accidentally dancing a polka with a gentleman - not because that one dance was an awful experience, but because now it would be very rude to turn down a partner because she doesn't "polka with boys." Her excuse is no longer a polite way to refuse a partner, but would look like an insult. So be consistent. If you hate quadrilles, you may refuse them on principle, but if you use that excuse I better not see you dancing any quadrilles.

Now, I make it a policy to include something visual in every post, so even if you don't read all the boring things I say you can get something out of the post. I looked for pictures of Ellen Emerson, but she is not that well-dressed or fascinating for the most part. So instead, a random picture about a polka. Specifically, the Hippopotamus Polka. I think it is hilarious and cute. 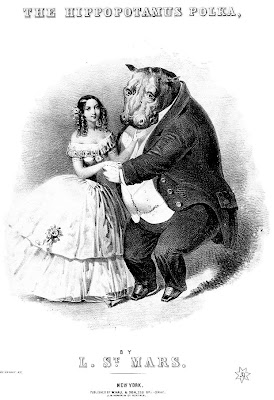 Posted by Antonia Pugliese at 9:58 PM