Are You Ready to Rockula?

About 200 years ago, Ralph (the vampire) was in love with a girl named Mona. Then her jealous rhinestone-peg-legged pirate ex-boyfriend beat her to death with a ham-bone. Since then, she has been reincarnated every 22 years. Every 22 years, Ralph meets her just in time to fall in love and see her killed by a pirate wielding a ham-bone.

I challenge you to come up with a more fantastically ridiculous premise than that. 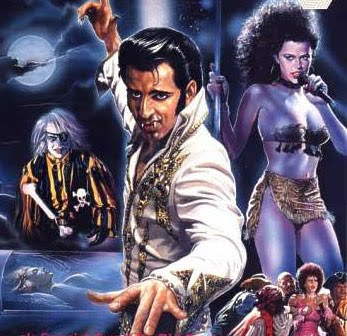 Other highlights include Ralph's scary vintage vampire mother, Ralph's semi-autonomous playboy reflection, and Stanley the sleazy wholesale coffin salesman and music producer. And did I mention that Ralph becomes a rock star in the process of wooing the most recent Mona incarnation? Yes, that is why the title is "Rockula." Better than the horrific example of comic rap called "Rapula." A small excerpt, for you:

"Gina, I mean Mina came too my crib."
"Gee, Mr. Rapula, you're awfully glib."
"She made me a dish called huevos dracula with garlic and eggs and a gold-plated spatula. You can read the commentary by William Saffire."
"Are you the DJ?"
"No, I am the vampire." 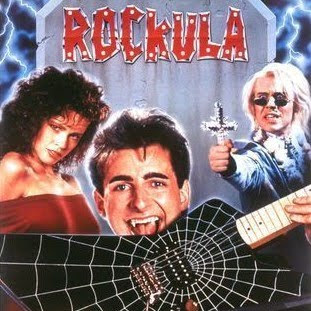 Of course, the dialogue is even more ridiculous than the lyrics. A couple of my favorite bits:

"Just forget you ever saw me, cause the next thing you know, we're gonna go out on a date, we're gonna fall in love, and then some crazy pirate's gonna peg you with a hambone!"

"You're such a dork, Stanley."
"Take that back."
"OK. You're an egotistical, psuedo-intellectual, money-grubbing slut."
"... I'll buy that."

So, I suggest you go watch it. Now.
Posted by Antonia Pugliese at 3:17 PM