Last night was another Steampunk event, Klockwerq, at its new venue (TT the Bears). It was a perfectly nice event, which gave me much reason to ponder the philosophical implications of dancing to modern music. Because that may not interest most people, I will separate out those ponderings - read them below. As for the important things in life, I threw together another random Steampunky ensemble. I started with some ruffly and bustled underwear, added a last minute overskirt, and topped it off with either a vest or a jacket. So last time I did the exposed corset, and this time I did the vest. I'm going for all the steampunk cliches! Apologies for not having brighter/clearer/less-silly-faced pictures, but it is what it is and you can see the outfit. 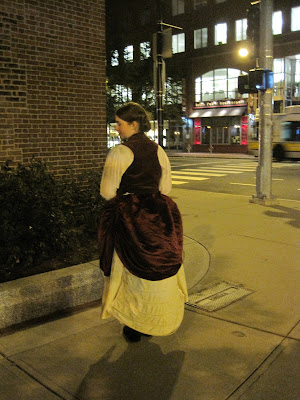 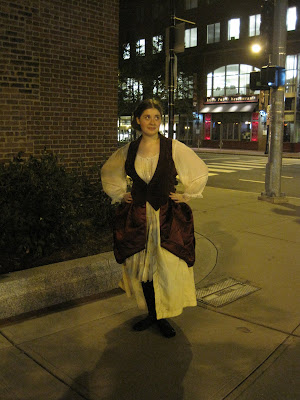 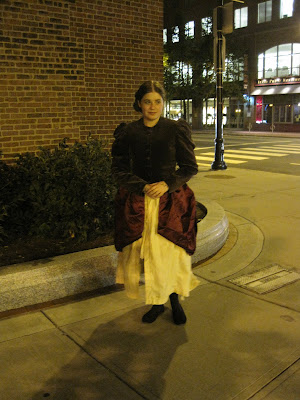 Ok, and now for some theory. Modern music is not, for the most part, intended for the social dances I know and teach. Mostly, I think it looks funny to do historical dances to modern music, and it strikes me as a matter of "just because you can doesn't mean you should." This is even more true if you can't (it takes a lot of experience and musical awareness to judge when something is "close enough" to a waltz or polka or one-step that you can get away with doing that dance - most of the time it is not at all close enough, and kind of excruciating to watch). Unless you're terribly experienced, I would advise sticking to the waltz (because it is much easier to recognize when a waltz is a waltz. Even if it is painfully slow or irregular at least you will look like you have a clue), and the Charleston (because who cares? The song is very unlikely to have that particular Charleston sound, but it is a particularly flexible dance in my opinion). Better yet, stick to modern club style dancing in a modern club style setting (of course, that makes me a bit of a hypocrite).

Another issue is that teaching on the dance floor is very rude. Frankly, if you are not a good enough leader to lead your partner into a step they do not know, you should not do it. Better to stick with what makes your partner comfortable than to turn a social dance occasion into a lesson. I did a couple of really entertaining dances with a friend at this event, but only because we were being silly and she knew all the dances already. It is more difficult to learn dances to inappropriate music - where an experienced dancer will fake things to make it work, a learning dancer won't know what is a fake and what is correct, so they will develop bad habits. They are also more likely to get flustered, but that is why I really feel that it is bad form to teach entire dance forms at any sort of event that isn't a class. Leading someone into a variation is one thing, briefly showing them or explaining the variation is less good but still acceptable if it is brief and unobtrusive, but trying to get someone to polka when they've never seen the dance before is really pushing it. Classes are for teaching, events are for being sociable, and if you try to teach at people in a social setting they are allowed to resent you. Fair warning.
Posted by Antonia Pugliese at 8:14 PM