My Philosophy of Steampunk Dress 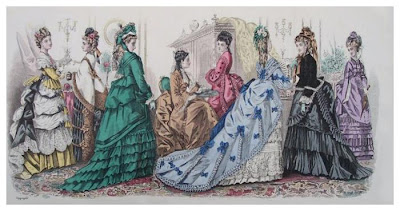 Robin asked me some questions (in response to my bustle posts) so good that I thought I would handle this in an actual post. Of course, then I didn't get around to actually posting it. Mostly, let us boil this question down to "What is Steampunk (in terms of clothing)?" First, a disclaimer: Steampunk is often about do-it-yourself-ness (and then sometimes it isn't!), and there is huge variation in how the term is used. Anyone can call something Steampunk, so I dare not claim to be an expert on what Steampunk is. Instead, I present my vision of what Steampunk should be. 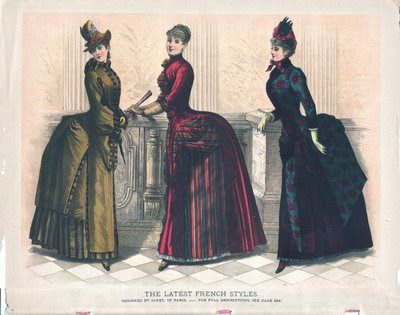 The theory of Steampunk that I support is an alternative history, where steam technology in the 19th century allowed for incredible machinery and futuristic technology to develop beyond what happened in reality. In my mind, then, Steampunk is a best-parts version of history (usually the 1870-80s to be extra specific, but I count anything in the 19th century as fair game) with a heavy dose of science and machinery thrown in. In terms of clothing, then, my favored approach is to start with something legitimately 19th century, then make it in a strange fabric or add science-y or mechanical details. A bustle dress plus goggles says you are a 19th century woman... who might also build incredible steam machines. A tailcoat plus a mechanical arm means you are a 19th century gentleman... who lost his arm in battle and now sports an incredible steam-powered killing machine in its place. 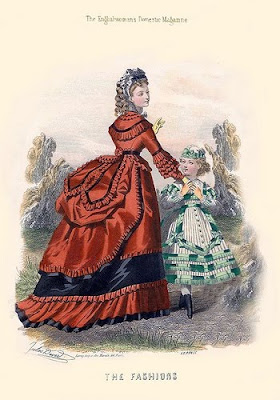 I say there are two basic options. You could go heavy on the technology, building fantastical theoretical steam machines to wear or amazing metal and leather accoutrement. Personally, I am not talented in this area, so unless I want to buy things (check out Brute Force Leather for some great examples of this approach), I will never look truly stunning. The second option, more within my grasp, is to do the 19th century well with an amazing and mostly accurate ensemble, then accessorize and branch out with things that are not accurate. I personally love the idea of having a great 19th century dress which is historically accurate to wear to a ball, but which is fun enough to wear for Steampunk. One outfit, with a multitude of opportunities for wearing it. On the other hand, I also like how friendly Steampunk is, with its lack of rules (despite everything I have just said). 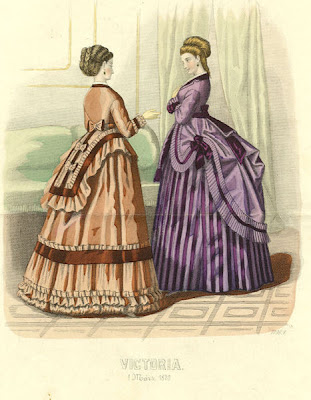 So, in direct response to Robin, I see two ways to use the bustles I had collected pictures of. One is to wear them correctly, under appropriate clothes, for the 1870s-1880s silhouette. You may stop there, or accessorize with fantastical or mechanical or scientific accessories. The other way is to wear them inappropriately for the 19th century, because for steampunk that is OK. For example, you could wear an exposed bustle, which would be scandalous and inappropriate in the real 19th century, but might be quite reasonable in your Steampunk alternative history. You might be an Airship Pirate, with an eye towards fashion but unable to wear long skirts while climbing in the rigging of your steam-powered war-zeppelin. You might be a Steampunk Saloon Girl, scantly clad while you serve drinks to rowdy scientists and mechanics. Perhaps you are a well-bred 19th century lady, but you've taken to a life of Steampunk adventures and so you do whatever you please, which happens to be walking around in your underwear (after all, a chemise, corset, and bustle can be fairly presentable). Who is to stop you? 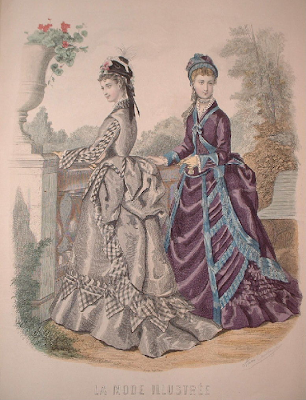 So some steampunk clothes have little to do with history, while some are close cousins of 19th century clothing. My heart belongs to the 19th century, so for me Steampunk is a just a nice outlet to do things that are "wrong" for real history (like make a pattern-test dress out of shiny synthetic polyester). For other people Steampunk is an ever-evolving concept, completely separate from its initial Victorian inspirations. I have told you what I like , but I do not mean to suggest that is the only way - just my favorite. 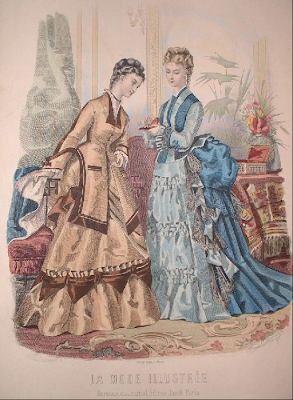 Regardless, if any of this spoke to you, you should probably come to the Technocrat's Ball in Porter Square this Saturday. Hit your closet, pull out something cool, and wear it proudly. After all, all it really takes to be Steampunk is attitude.

Posted by Antonia Pugliese at 10:53 AM