Steampunk 102: Who is Steampunk?

Yesterday's post gave you a crash course in some common motifs of steampunk fashion. Today's lesson is an introduction to some of the overarching Steampunk styles.

Any given outfit is likely to incorporate more than one of these, but also likely to favor one over the others. For the sake of this lesson, we are going to say that a historical influence (almost always the 19th century, which is what makes the most sense in terms of the actual course of steam technology) applies to all outfits to different degrees, but is not critical in determining the 'personality.' This leaves us with two main categories, with styles that favor either science or adventure (though usually not to the exclusion of the other). Any of these can be interpreted into a male or female costume, so don't mind the example pictures. Also, these should be inspiration and starting points - it is not an exhaustive list, so don't feel limited!

What follows is a random sampling of some of the most commonly seen styles in Steampunk fashion. Which are your favorites? Are you a slave to science, or a daring adventurer? Leave a comment! 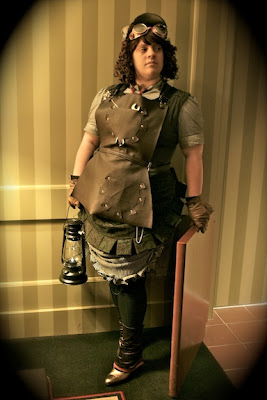 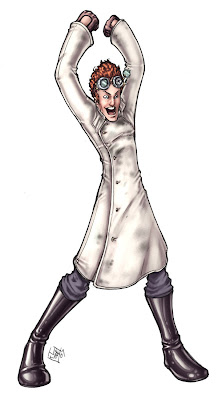 Just as much of a scientist as the engineer, but more interested in studying things than in building them.
Suggested accessories: lab coats, lab equipment, a notebook for keeping track of observations, a good maniacal laugh 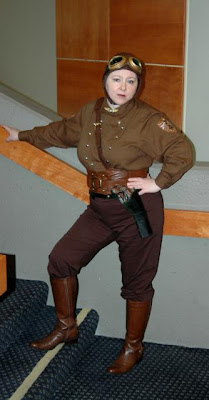 This person could pilot an airship, or might instead have some kind of personal flying machine. They sure know the ropes - and the gears, and the engines, and the helium sacks, and the pistons, and... you get the idea.
Suggested accessories: aviator goggles, aviator caps, a dashing aviator's scarf, tailored garments for dangling off ladders and rigging while in the air 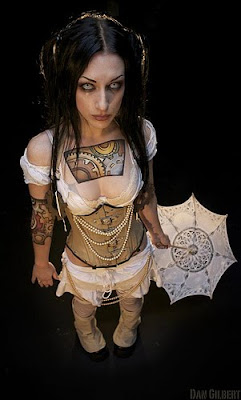 This person was made (probably by some engineer!), and not born. Imagine steam-powered automatons so complex that they are difficult to distinguish from their biological counterparts.
Suggested accessories: gears, a maker's mark, rivets that look structural, a portion of clothing or skin (use makeup!) that pulls away or is missing to expose complex inner workings with machinery and gears 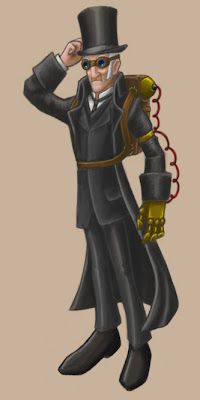 There is no mistaking that this person is a lady or gentleman. But they also like science. Whether this is a well-bred person who dabbles in scientific fields, or wealthy patron of science who funds the expeditions and research of more serious scientists, they should be well dressed and ready to do what they can - FOR SCIENCE!
Suggested accessories: a stunning 19th century outfit plus a pair of goggles, amazing machines you have made or bought 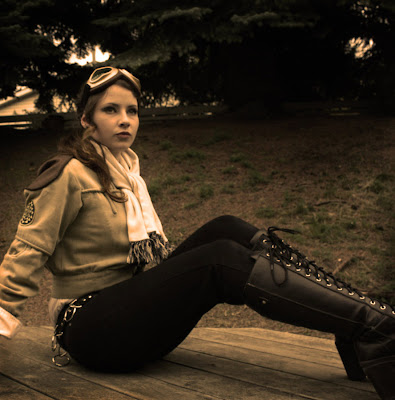 This is a big one. Pirates are bad-ass and adventurous. Airships and zeppelines are astounding feats of engineering with a historical precedent. The idea of a pirate crew aboard an air-travel vehicle is a staple of Steampunk literature. Likewise, the look of an air pirate is a staple in Steampunk fashion.
Suggested accessories: eye patches or steampunk monocles, loose pirate shirts, baggy bloomer-like pants, weapons

The Military Man (or Woman) 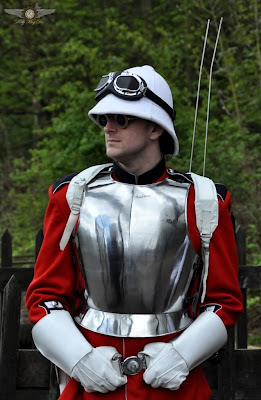 Military elements show up in a lot of Steampunk clothing. Sometimes these are complete fantasy, and sometimes these are borrowed from various 19th century armies, but all they time they are stylish and neat.
Suggested accessories: epaulets, pauldrons, armor, piping and military-style trim, shiny buttons, clean-cut jackets, military hats, medals or patches, military-issue weapons 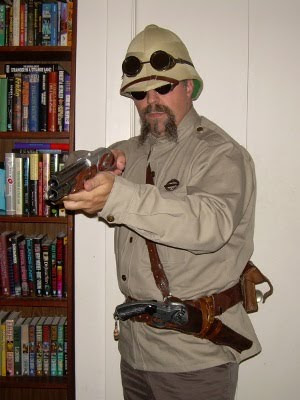 Somebody get this man a pith helmet! The explorer goes adventuring to far off lands, and might incorporate elements of the local dress into his or her wardrobe. On the other hand, I have no problem with the Anglo-centric model of Steampunk, so the explorer in my mind wears khaki and linen, taking his or her cues from 19th century archaeologists and big game hunters.
Suggested accessories: pith helmets, khaki vests or jackets, linen suits, packs and bags, compasses or navigational tools 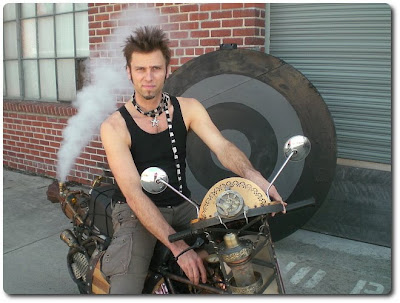 A lot of people get fixated on the "punk" in Steampunk. The word itself is modeled after other terms, like "Cyberpunk," for sub-genres that were rather more punk-y. I see no reason, personally, that Steampunk clothes should be tattered or streaked with soot, UNLESS you are some kind of Steampunk street urchin or chimney sweep! So that is how I think of these people, though I think some of them may just be confused about the meaning of Steampunk.
Suggested accessories: soot, torn or ratty clothing, caps set at a rakish angle, a lower-class British accent

The Spy or Saloon Girl 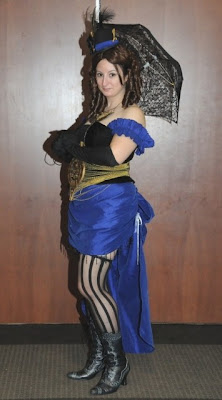 Let's face it - a lot of women's Steampunk outfits follow the exposed corset formula. I have seen a lot of "Steampunk Saloon Girls," and also a lot of "Generic Steampunk Woman Who Runs Around In Her Underwear," but I didn't think that last title was really up to snuff. So I'm going to call them spies, because for all I know that is the truth, and the exposed undergarments are a ploy to distract us from their adventurous and dangerous spy plans. But really, they are women in underwear. One way or another, that certainly goes in the "adventure" category.
Suggested accessories: spy gadgets, short skirts, really cute underwear including corsets, hoops, bustles, bloomers, chemises, garters, and more
Posted by Antonia Pugliese at 11:06 AM