Oh dear. I do realize that the natural extension of taking a comprehensive look at Regency women's clothes, and how to fake them, would be to do the same for men. But this is so much more difficult! Not only do I not know nearly as much about men's clothing, but modern styles are much less likely to overlap in useful ways. Phoey!

On the bright side, I can promise you that this is no reason to stay away from the Commonwealth Vintage Dancers' ball this Saturday! I look forward to seeing you in whatever formal or semi-formal outfit you have lying about. But let me stop skirting the issue and take a stab at it. 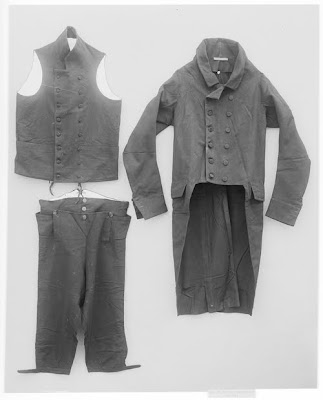 To be dressed, you are going to need pants, a shirt, a vest, and a jacket. Ooh, and a neckcloth. Sir Percy Blakeney would never forgive me if I forgot that. If you are out and about, you would also need a hat and perhaps an overcoat - since they won't be missed in the ballroom, I won't even go there right now. To really get it right, I think you have to start from scratch and learn to sew. So the long term goal is to learn to sew, look really spiffy, and then pick up girls with both your fabulous wardrobe AND your fabulous sewing skills. It worked for my father. It is also working for the guy in these pictures. In the short term, let's see what limited-sewing modifications I can come up with for getting the right look. 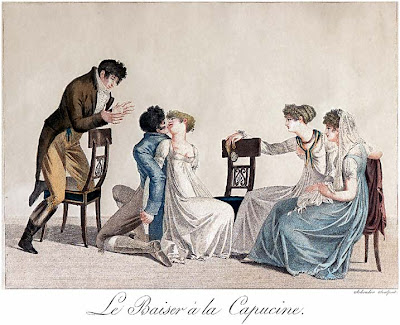 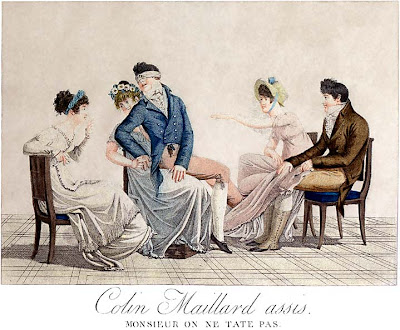 Pants (and a little about boots and shoes)
This is a tough one. Your should probably, especially for a ball, be wearing breeches. Until your local Breeches-R-Us opens up, or men's fashions change in a rather unexpected manner, you won't just find these. But it is possible to fake them with limited sewing skills, by modifying a modern pair of pants to make them short, and adding a piece to cover the modern fly with a fake "broad fall." 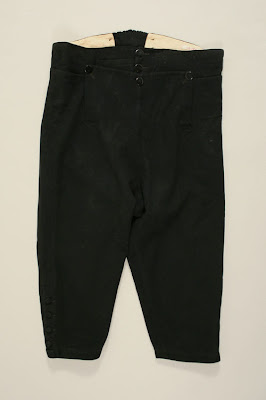 Take a pair of pants, and chop off the bottom of the legs, a few inches below the knees. From those removed pieces, make two rectangles that measure (2x a good depth for the band + an inch for seam allowance = probably about 4 inches) by (the circumference of your leg where the pants will end +1 in for seam allowance + more if you want to overlap and add a button). Make these into cuffs (sew them into a circle, fold in the seam allowance along both edges, fold in half with the seam allowances on the inside, and sandwich the cut end of the pants into that). Also from the leftover pant legs, cut out a rectangle of fabric. Finish the edges (fold in so there are no raw edges), and sew this onto the front of the pants to cover the fly. 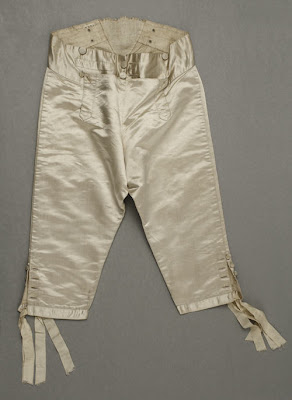 There are other options. Long pants were beginning to show up in the regency period. They would not have been appropriate for a ballroom, but I won't tell if you won't. Some of these were sort of full, similar to modern trousers (though the modern fly design is really too modern). A lot of them had really skinny legs, more like the skin-tight buckskin breeches look. If you have them, wear them. If you have a pair of stunning boots, especially Hessian boots (with the cool dip in the front and a cute tassel!), all the better. But as hard as it is to fake pants, I bet it is harder to fake boots - plus they are not so good for dancing. For dancing, leather slippers were fashionable, so modern men's ballet flats or jazz oxfords would be cool, or just wear your favorite dress-shoes for dancing. 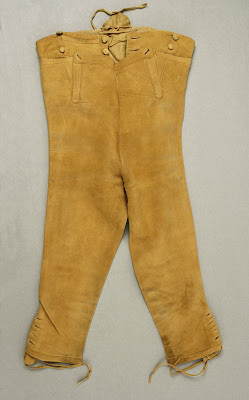 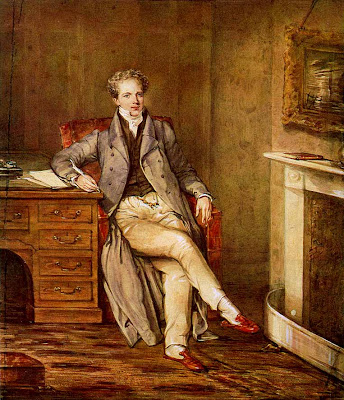 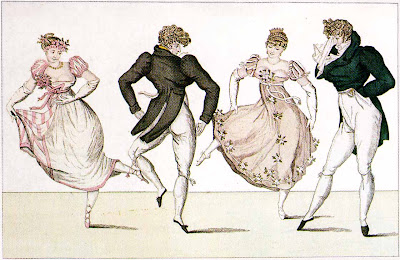 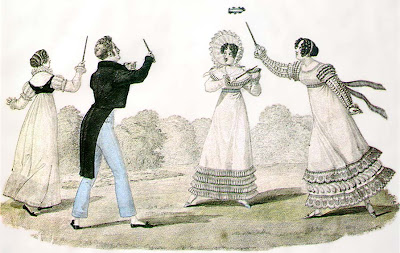 Shirt
Find a white shirt with a collar. Done. Really, the ideal regency shirt would be along the lines of a poet's shirt - voluminous sleeves, very plain but full. If you are interested in sewing, this is a good and easy project to get started on. If you are not good at sewing, this will be one of the least visible parts of your outfit, mostly covered by other clothing. Put on the shirt, flip up the collar, and tie a neckcloth around it. 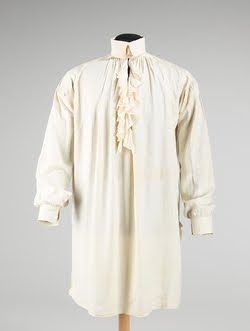 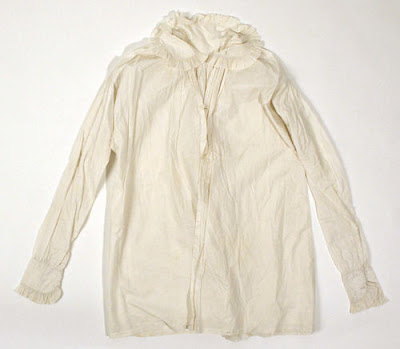 Neckcloth
A spiffy cravat, or intentionally understated neckcloth if you prefer, will be indispensable. Luckily, it is just a big rectangle of white cloth (preferably linen, but work with what you have)! How do you tie it? Again, this is not so much my area of expertise. Check out this collection of descriptions here (Neckclothitania), or look at portraits and fiddle with things until you get it to look right. Just remember to pop the collar first. 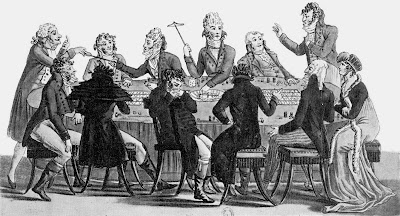 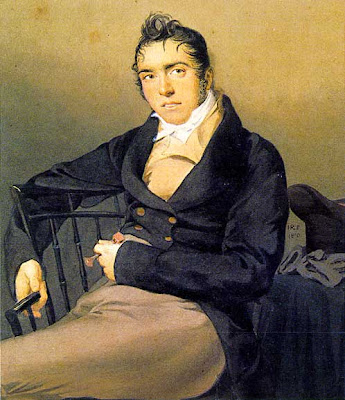 Vest
I suppose I should call it a waistcoat, but I am a mid-19th century girl at heart, so I forget these things. The most critical and noticeable difference between a regency waistcoat and a modern tailcoat is the bottom edge. It should be totally flat across. This should be an easy thing to fix, by flipping the points on a modern vest up and pinning them or sewing them to the inside. The nice thing is that these early century waistcoats can be much more spiffy and fantastically colored than for their later in the century cousins, so enjoy your freedom. 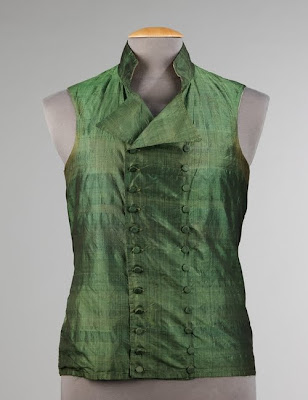 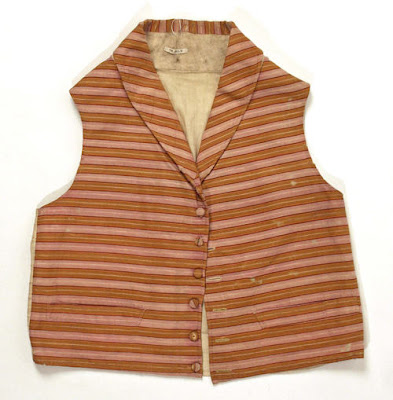 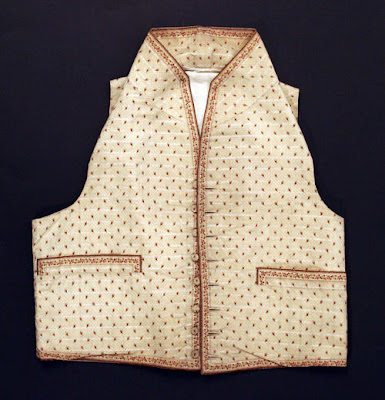 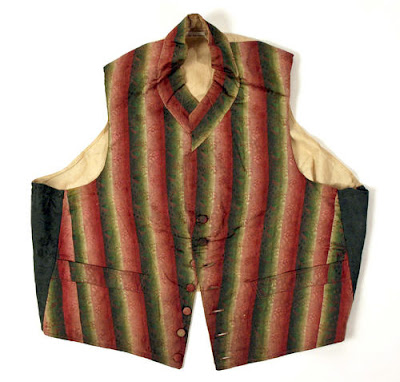 Jacket
Wear a modern tailcoat. Actually, wear the most old-fashioned tailcoat you can find (if you invest in a tailcoat that is good for the 1860s now, you can wear it to this AND to the Returning Heroes Ball next month!). I am not going to give suggestions for modifications, because there are not really any easy fixes. The front should end near the waist, with an inch or two of waistcoat showing below. It should either be scooped (good for early regency), or straight across with an angle to the straight sides of the tails (good for late regency). The easiest way to identify a really good regency tailcoat is the lack of a seam at the waist, where the tails join. This became very much the norm for the mid-19th century, but was totally unheard of at this point. If your tailcoat already has this seam, there is no way to get rid of it, so just smile and ignore it. Really, in terms of getting the silhouette right, it is not so critical. In terms of colors, there is also more variation here than later in the century when men take up the all-black all-the-time approach to dressing. Still, black is very serviceable, so that is what I would personally go for. I should also warn you that most regency tailcoats were double breasted, while most modern tailcoats are meant to look single breasted AND are meant to hang open. As I said before, to be perfect you must learn to sew, but you can look good enough without. 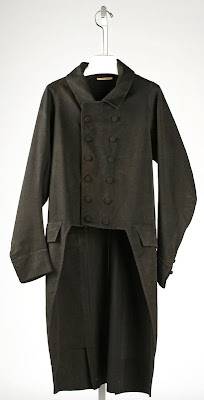 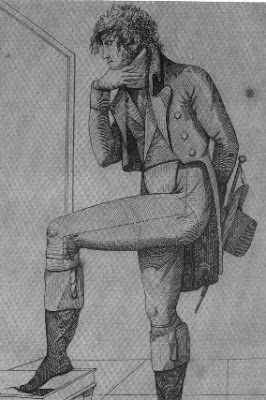 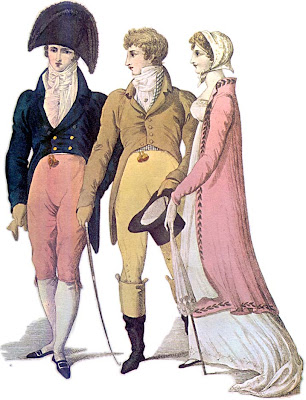 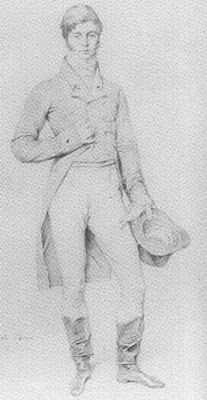 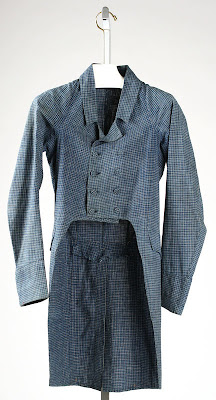 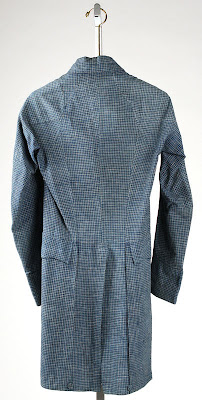 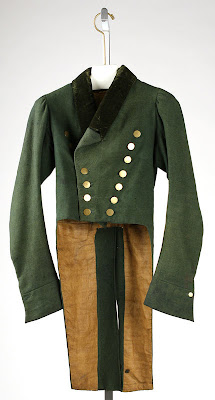 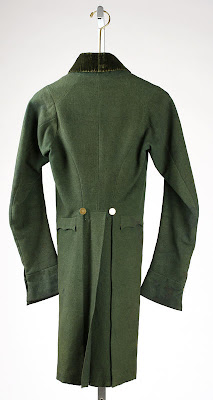 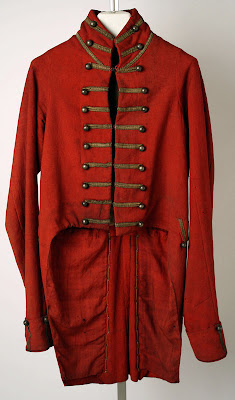 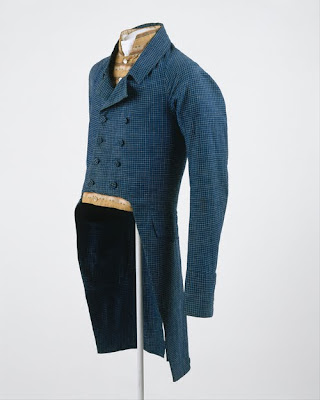 Posted by Antonia Pugliese at 9:58 AM