The Mystery of the Missing Infanta Margarita

When I was in Vienna, I went to the Kunsthistorisches Museum. I saw several paintings by Diego Rodriguez de Silva y Velázquez of the Infanta Margarita Teresa, including this one. This makes sense, because she was engaged to the older Leopold I in Vienna. While she was still a child in Spain, her father had a series of portraits painted to send to her future husband. So basically, I believe that this painting would be in Vienna. 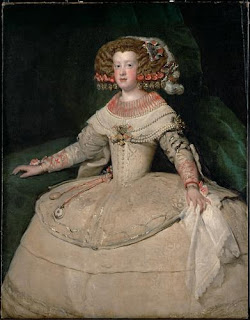 But as you may have noticed, I also went to the MFA in Boston recently. And as I walked into one of the permanent exhibits (not, mind you, some kind of special temporary exhibit that might include loaned artwork)... there she was. So this is not really the mystery of a missing girl, but one who turns up in two different countries, two weeks apart. Did Velazquez make multiples? I can't find any mention of this phenomenon anywhere, and I don't understand. The MFA tag certainly didn't say it was a multiple, copy, or non-original. And the Vienna version makes sense to me, even if the plaque was technically in German. But the internet seems to believe that she lives in Vienna. So what is she doing in the MFA? Hmmm???
Posted by Antonia Pugliese at 11:33 AM