Vienna is covered with pictures of Empress Elisabeth, commonly known as Sisi. She was a tragic and romantic character, and her life is actually pretty interesting if you look into it. But to be entirely superficial, she is well known for being beautiful. She did a great deal to preserve her beauty, and had ridiculously long hair. Which is where the stars come in. Here is the most famous painting of Sisi, painted by Franz Xaver Winterhalter (she only sat for portraits at the height of her beauty... there aren't that many in total). 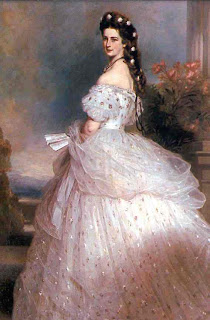 See the hair stars? From what I can tell, although the information about this is inexplicably difficult to find, she had at least two sets of 27 - one set with ten short points on a larger body, made of gold and silver with diamonds and a big pearl in the center, and the other set with eight longer points on a small body, silver with graduated diamonds headed out to the points. Anyway, clearly the rest of the world does not think this is the most important thing about her, but I find it very exciting. Here is a picture of what I think is an original, of the ten point variety.

The official museum gift shop in Vienna (for the Sisi part of the Hoffburg, and also at the Schonbrunn palace) sells ten pointed stars, but I think the proportions are wrong (not sharply pointed enough, and the points are too long relative to the body), and they have no pearl. They are pretty, though. Outside of the museum shop there are a couple other versions, including a very very sparkly eight pointed version, which doesn't look so much like her eight-points, so much as it looks like a better proportioned 8-point version of the 10-point stars, but with a large crystal in the center rather than a pearl. I have one of each and adore them, but they are far too expensive to get 27 (not that I even need that many... she had a lot more hair than I do). I am currently looking into a cheaper alternative, because I don't need name brand Sisi stars to have an excuse to fill my hair with sparkly things.

Case in point, this portrait of Mrs. C.W. Stoughton, painted by Richard Buckner. I wish I could find out more about her, or the painting, or at least the artist. But even so, I intend to join the sparkly hair doo-dad bandwagon! 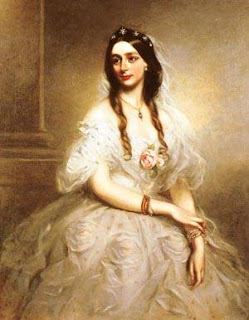 Posted by Antonia Pugliese at 12:25 PM