A few nights ago I went over to visit some friends in their dorm. Which then developed into watching Bones. Which then dissolved into tears (perhaps not literal ones) as Megavideo failed us. Silly time limits. So instead we watched Repo the Genetic Opera.

I had actually completely forgotten how gruesome the movie gets. I was already familiar with the music long before seeing the movie, thanks to a different friend who is a particular fan (she made a Gentern outfit - what the sketchy nurses from the movie wear). So when I watch it, I hear all sorts of relatively clever lines and amusing phrases that I know are coming. But when my other friends watched it, they saw horrific scenes where dear sweet beloved Giles (that is, the same actor who plays Giles in Buffy) starts ripping people's organs out. Maybe I am not sufficiently bothered by this because it is so explicitly ridiculous, or maybe I was better prepared to like the movie. At least, I didn't have to look away each time a heart or spine was ripped out. 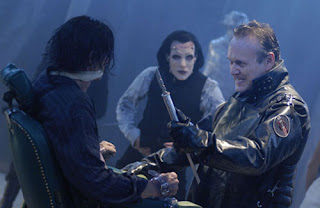 (No Giles! Don't do it!)
By the way, in case you don't know the set-up: Imainge a sort of post-apocalyptic world where organ failures become an epidemic. Up comes "GeneCo," a company offering easy and relatively inexpensive organ replacement surgeries. And cosmetic surgeries too. And surgery for the sake of surgery, for the many surgery addicts. But that is beside the point. Good so far - longer lives in surgically enhanced bodies. But surgery is still a pretty pricey undertaking, so there are payment plans. And if you are late making those payments, the Repo Man comes to get the organs back... 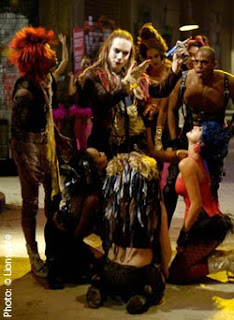 (Addicts, from the best musical number in the movie (Zydrate Anatomy))

Anyway, it is not a bad movie, but apparently it is much more potentially gruesome and disturbing than I had realized. Go figure.

Now, what I am really confused by is the new movie coming out called Repo Men. Here is the plot description stolen from IMDB:
"In the future humans have extended and improved our lives through highly sophisticated and expensive mechanical organs created by a company called "The Union". The dark side of these medical breakthroughs is that if you don't pay your bill, "The Union" sends its highly skilled repo men to take back its property... with no concern for your comfort or survival. Former soldier Remy is one of the best organ repo men in the business. But when he suffers a cardiac failure on the job, he awakens to find himself fitted with the company's top-of-the-line heart-replacement... as well as a hefty debt. But a side effect of the procedure is that his heart's no longer in the job. When he can't make the payments, The Union sends its toughest enforcer, Remy's former partner Jake, to track him down."

Sounds familiar, doesn't it? I will admit that the plot in terms of actual characters and events sounds significantly different. I wonder if it will be any good - it sounds a bit too serious once you take out the ridiculous plot, silly clothing, and amusing songs. 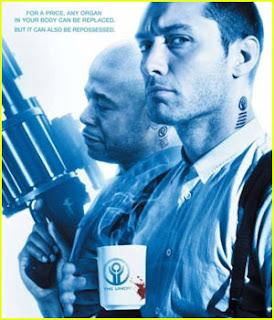 (Serious, Serious)
Posted by Antonia Pugliese at 10:18 AM