Mother was hired to go out to Old Sturbridge Village, where ALHFAM, "the Association for Living History, Farm, and Agricultural Museums" was haveing a conference. They hired Spare Parts for some wonderful music, and we did some dancing. The background noise level was higher than at some events we do because of the bar, but the people were nice enough that this wasn't really a problem. We did several dances, and I think people had a lot of fun. As always, Spare Parts is a really great band, so it was lovely to see them again.

We had a minor embarrasment with out hoops. The event was Thursday night. Wednesday afternoon, mother was in a car accident. She wasn't hurt, and it was very obviously not her fault at all, so it is mostly inconvenient. We had to get a rental car. The issues is that we were wearing 1860s, and our hoops were in the back of her car, which was at the shop! So we wore our dresses hoop-less, and they actually worked just fine. In the final analysis, with the tiny dance floor at out disposal, this was probably for the best. Oops. 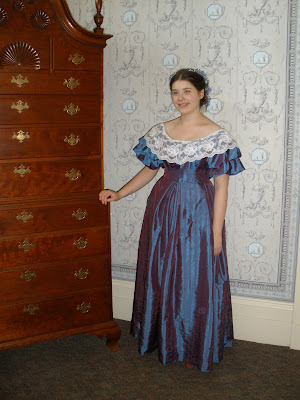 I wore a newly-made hair wreath. We bought the flowers, and I made the wreath. Then, when I was feeling very accomplished, all the little blue flowers kept falling off their stems. So I painstakingly took every single one off, and super-glued them back on. Those suckers aren't going anywhere now! I like the look of the drippy blue flowers. 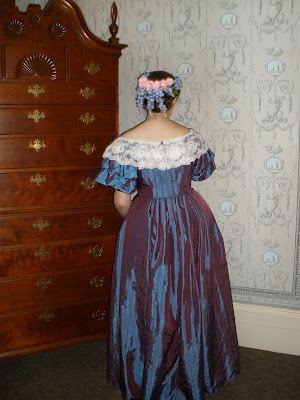 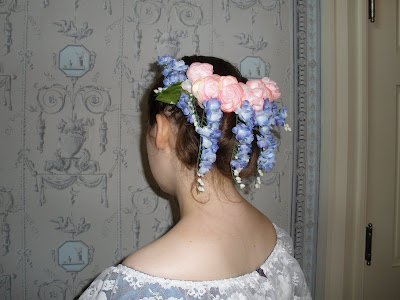 Posted by Antonia Pugliese at 10:22 AM