After driving home from Dances of Vice, it was time to hit the Charles River Museum of Industry for an event that we had helped to conceive of (so we certainly had to attend it!). The museum is not very well known, but it is really lovely. It is all about industry and machinery, so they have really cool things like a watchmaker's bench set-up, a stunning early telephone booth (my favorite), a steam powered fire engine, and more! Unfortunately, with the recent flooding (and since the museum is right on the bank of the Charles River), it was pretty severely damaged. This event had to be postponed, and even so some of the damage was evident. It is really a shame. Hopefully the success of the event will help somewhat with the costs of the damage. Hopefully it will also have raised awareness and found new members, because the last time I asked, before the event was even over, well over 600 people had come in!

The event itself was lovely... there were a number of demonstrators and vendors with great things to look at. Mother taught some dancing, with the lovely Ad Hoc Quadrille band accompanying her. More than anything, I am glad so many people showed up. Here are some pretty pictures. 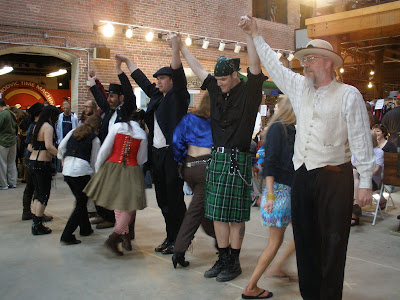 People doing the Gothic Dance. I love that dance. 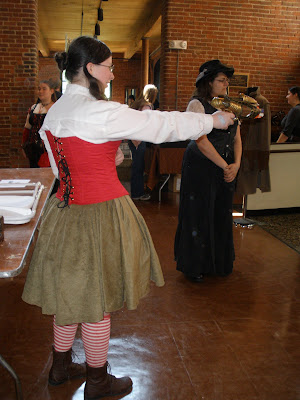 One of the display tables was advertising for a steampunk larp. They had steampunked nerf guns, and let people shoot at a stacked soda cans for a prize (a fake mustache!). Here is my little sister trying her luck... she hit the cans on the first try, actually. Her outfit includes a short hoop I made and the red corset I made for her Queen of Hearts costume for Arisia, if you remember back that far. 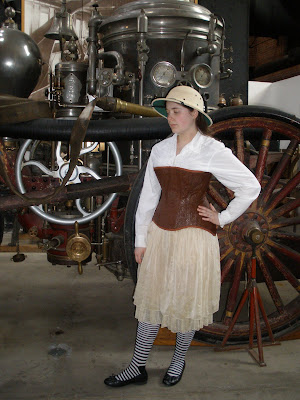 My outfit was pretty unremarkable. Another appearance for the super-cool upholstery vinyl Edwardian corset I made. I love that thing. 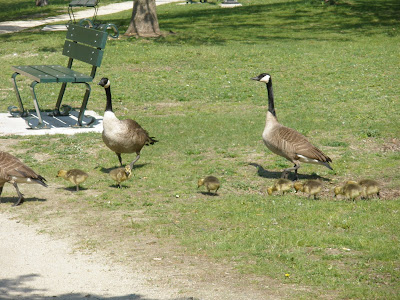 Goslings! There were a bunch of geese hanging out around the museum, including all these cute little goslings! There was a goose fight when we first arrived... two geese locked necks and violently batted their wings at each other. It was really quite dramatic! There was also a nesting goose just outside the museum. She was really concerned about so many people walking by. Poor thing.
Posted by Antonia Pugliese at 11:30 PM