Tales from the Dances of Vice Swan Lake Ball

Stories of this weekend's adventures are coming a little late, since I've been too busy to post about them for a couple of days. Friday we drove out to New York (my mother obligingly signed on for this crazy adventure). We found miraculously good parking and got dressed in the street. I didn't actually teach dancing until one in the morning, so I guess that was Saturday technically. Then we drove back, to be home in time for the next event! What a busy schedule.

It was well worth doing, however. The event was lovely, and everyone was very nice. The Galapagos art space was fantastically fun to see - imagine a stage, and the seating for the audience suspended on platforms with walkways over water. There were some excellent performances - an ugly duckling themed ballet, some wonderfully dramatic opera (with a little Lady Gaga thrown in for good measure), and a fashion show with stunning wigs. After that, I got to teach a few easy contra dances, which went really well. In fact, people were so excited to dance that when I invited them to come to the stage and learn, I got more volunteers than would even fit on the stage! It was really wonderful. As is always the case, it took a little while to get people set up, but after that the dancing went very smoothly. I am still thrilled that it went so well. 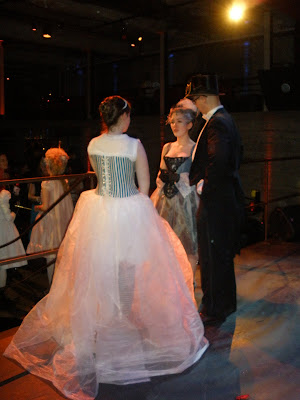 (Talking to some nice people after the dancing)
The organizer, Shien Lee was a very courteous and generous hostess. She really did a great job with this event. There were also lots of really incredible outfits to look at - I think it is really wonderful that there is so much enthusiasm for dressing up. There is a Dances of Vice flickr group with lots of pictures of people all dressed up for events, if you want to go look. The high standard for costuming inspired me to throw together an outfit for myself, aiming for dramatic and over-the-top. I hope I got close, even though some of the construction ended up being incredibly last minute (meaning that Friday before jumping in the car...). It isn't clear from the pictures quite how cool the skirt was. It is made from a crispy organza with a life of its own. If I moved the skirt, it would sort of hold whatever shape I had put it in. I was also very worried about the floating candles on the water, because I could practically see my large ungainly skirt of highly synthetic and probably flammable material bursting into flames as I walked down a walkway and brushed over a candle. Eek! But there were no unintended flames the entire night. 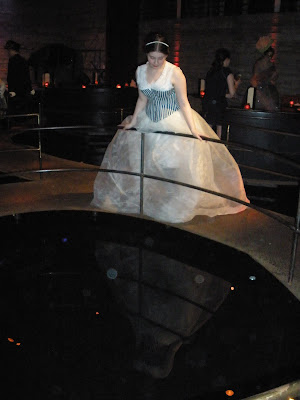 This is a picture of me, with my reflection in the water. Isn't that incredibly cool? It was a lovely and enjoyable event, and I really look forward to going to more events by Dances of Vice in the future.

Also, there was one last funny moment. As I was finishing getting dressed in the street, before actually going to the event, a couple of (mildly tipsy? I think) girls were wandering by, and started congratulating me. It turns out they though I had just gotten married. Personally, that is not what I would wear for a wedding, but I guess I can see where they are coming from. Maybe. 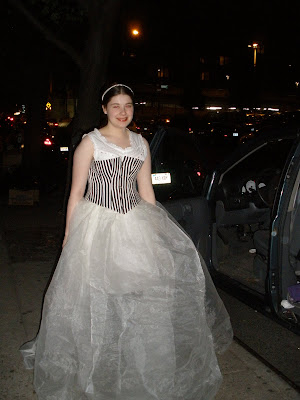 (Getting out of the car. Or getting married?)
Posted by Antonia Pugliese at 3:08 PM