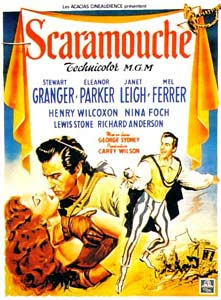 If I say something about Scaramouche to someone, I am usually met with a, "What? Like the Queen song?" (referring to the "Scaramouce, Scaramouche, will you do the fandango?" line in Bohemian Rhapsody). If I said something to a Commedia del'Arte friend, they would surely know the name of the character (although the group I perform with does not use that particular character... they do Italian renaissance and he is a just a later character). But the best reason to know the name Scaramouche is for the incredible 1952 movie.

I recently showed this to a friend, so it is very much on my mind. The movie is based on a book from the 1920s, though the plot is significantly different. This movie has a lot of things to recommend it, from cute 1950s-ified 18th century clothing to clever dialogue. Probably the most notable feature of Scaramouche is the incredibly good final fencing scene. Seriously, go watch it now.

If you are curious about the plot, here is an idea of what happens. Otherwise, stop reading now. Preferably to go watch Scaramouche immediately. The movie starts with the villan, the Marquis de Maynes. I say villain, but he is a dashing and well-dressed villain with impeccable etiquette, so that is really quite alright. He has a habit of dueling (and is an excellent swordsman), so the Queen calls him in to chastise him for killing some of her favorite nobles, and also to ask him to find a wife (there is some serious tension between those two). He says he will marry, but asks her to choose his wife. She suggests Aline, and everyone is wiling to go along with this. 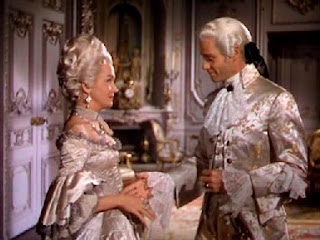 (Tension! I told you he was well-dressed) 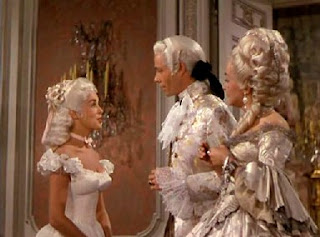 (Aren't they all so pretty?)
Meanwhile, our hero, Andre Moreau (played by Stewart Granger), is having troubles with the actress Lenore. He stops her from marrying a wealthy (but insufficiently romantic) sausage maker, and says he will marry her. But then he gets very side-tracked, getting his dear friend Philippe de Valmorin (who happens to be a revolutionary, and has been publishing revolutionary pamphlets! Oh dear!) out of Paris and out of danger. Moreau meets Aline, and falls immediately in love with her, but also realizes that they can't possible be together (there is a very good reason, but I wouldn't want to ruin all the good revelations for you!). 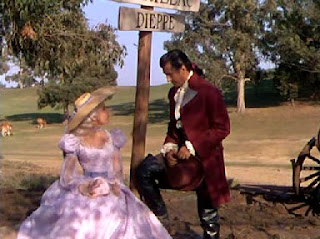 (Meeting Aline - Seriously, are you sure this is the 18th century, not the 1950s?)
To speed up this summary a bit, the Marquis kills Philippe in a duel, Andre is beyond upset and becomes determined to kill the Marquis. Of course, since our hero has no talent for fencing, he will need to learn first. Also, he is now in a fair bit of trouble with all this revolutionary business. He hides with a traveling theater troupe, playing the masked character Scaramouche! He picks up some fencing lessons, falls into politics, and continuously seeks his revenge on the Marquis. Of course, now you really have to go watch the movie to find out the rest of what happens. 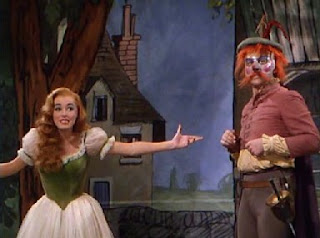 (Disguised as Scaramouche!)
Posted by Antonia Pugliese at 6:32 PM