I meant to put up pictures of Vienna when it happened, but various technological difficulties and camera malfunctions meant I didn't even end up with pictures until recently. So this is what we wore in Vienna (if you don't recall, I went with my mother and sister to a vintage dance week in Vienna this February, and it was fantastic).

There were only two really fancy balls (and one casual costume evening which we did not manage to pack anything interesting for). First, there was an afternoon dance, with a lot of regency clothes and Sachertorte for refreshments. Mmmm.
For that one, we wore dresses made from a Past Patterns pattern for a Federal Dress. The grey one was made by Saundra Altman herself (she makes Past Patterns, and is a wonderful clothing historian). The brown one was thrown together on a sewing machine by mother and myself. The red one was made in Vienna, handsewn throughout the week by the two of us. Basically, mother realized she had nothing to wear and no time to make something, so she threw the pattern and a chunk of fabric into the suitcase. It is really cool fabric, by the way. 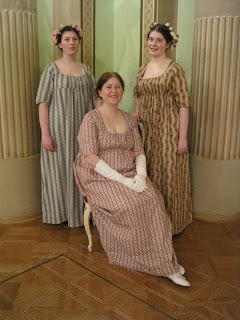 Ever since I went to a talk about Fashions in Federal New England (go here to read about it), I have had this thing about regency dresses looking like columns. So I had to have a picture with a column. You can just barely see that I am wearing my fantastically cool red dance boots here. I love those so much. 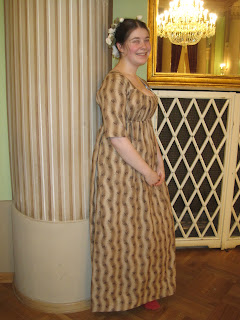 Then there was the final ball. We wore 1860s, though that was not universal. I always forget how atypical we are in the Boston area (and Newport when we hold our ridiculously fancy dance week there) for segregating by time period. We have 1860s balls and 1890s balls, and most people at least make a stab at wearing the right silhouette. I think that the outcome is a more realistic ball-going experience... more like time travel and reconstructing an actual event, less like a mish-mash of fun historical things. Which is certainly not to say that I don't like mish-mashes too, I just think that what we do is particularly special.

Anyway, there was an impressive catered dinner, and dancing, and really adorable dance cards that Andrea made. Lovely lovely. Also, I love my shiny blue ballgown. It is too much fun. I am wearing red dance boots here too, although you can't see them. 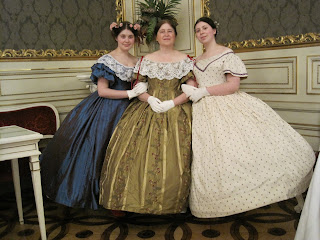 Also, while I often look silly in pictures, this is my favorite. I was laughing... 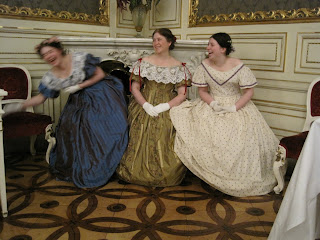 Posted by Antonia Pugliese at 11:33 PM