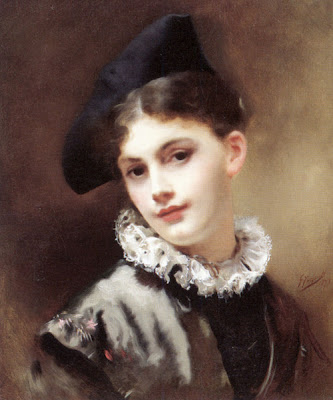 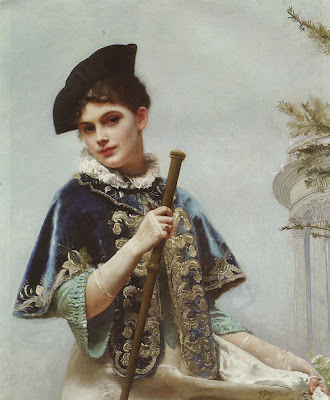 Here are a couple paintings by Gustave Jean Jacquet of an especially girly and adorable tricorn hat. Very pretty, I think. I made a couple of miniature tricorn hats a couple of months ago, and I should probably make more. They were awfully pretty, though I have never been quite content with the way that miniature hats like that look... imagine a flat tricorn hat... since it isn't big enough to stick out around your head, it rests on a plane on top of your head, meaning that the points are kind of stuck out above the head. I don't personally like how this looks. I had only come up with two solutions to this issue. One is to make the hat smaller, but I prefer the proportions of a small hat perched on the head to that of a genuinely tiny hat plopped on the head. The other solution is to the hat plane problem was to put the hair up and make it bigger, so it meets the plane of the hat for most of the underside area. I hope that sort of made sense... the downside is that this limits the usefulness of your hat.

Anyway, it looks like this girl has just gone with it, exaggerating the tipped-up nature of the points of her hat so that it looks more intentional. I should give this a try, since it really looks quite attractive.
Posted by Antonia Pugliese at 12:47 PM