I was finally feeling a little bit better (after an absolutely vicious cold), so although I though I would have to miss this even, I made an appearance. A sniffly, less than impressive appearance, but it was nice to see things anyway. I have a couple of friends who go to Wellesley (or "Felding" in the SCA), really lovely girls, and all their friends there also seem very nice. They should be proud of pulling off an adorable event, even in the face of adversity (getting permission to use college spaces can be really difficult!). There was lots of sunshine and pretty grass to sit on. There was fighting, but I think I missed most of it. There was a Commedia del'Arte play. There was some dancing. There were marinated mushrooms (which I have a ridiculous affinity for). In my opinion, that adds up to a very nice event indeed!

I was so not together that I didn't even take pictures of people being lovely. But this is one I have scavenged from facebook... shhhh! Don't they look lovely? 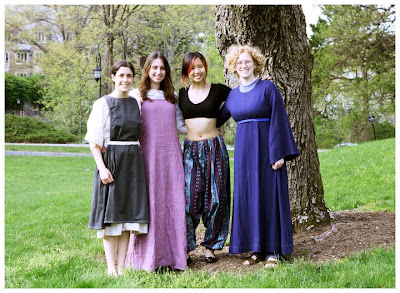 Posted by Antonia Pugliese at 10:25 PM