Blanche d'Antigny And Her Velocipede 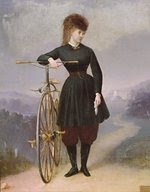 Am I in love with the outfit, or the bicycle? Surely both. According to wikipedia, because I don't actually know anything about her, Blanche ran away from home at 14 with a lover, but then joined up with gypsies. A good start, no? She worked in the circus, dance halls, became an operetta singer, collected wealthy lovers, and eventually went off to Egypt to avoid scandals in Paris. Then she died a miserable death. But up until that point, it sounds like she was having a grand time. She is famous for having a character in a novel based off her, but as I don't really know the novel this is less fascinating to me. Also according to wikipedia: "When Blanche was asked why she had taken along to Cairo not only her chambermaid but also her coachman although she had neither horses nor a coach there, she is reported to have answered: 'What the hell! I owe Augustine twenty thousand francs, and Justin thirty-five thousand; they wouldn't let me go without them!'" Oh my.

So perhaps she was a little too much for my tastes, but at the very least what a great outfit for riding a bicycle! One day I want both a bicycle and an outfit to wear with it. How funny is it that my first though was "How impractical. It would be much more sensible to spend that time making a ballgown. Now that I would have opportunity to wear!" I lead a strange life, you know.
Posted by Antonia Pugliese at 12:31 PM