I love beautiful underwear. It is just too much fun. I recently made a black and white striped corset, and I have another several corset projects in various states waiting to be worked on. I also find the 18th century to be very inspiring. In honor of these things, I urge you to watch the music video for "Can't Speak French," by the British band Girls Aloud. Embedding has been disabled for it, but you can find it easily on youtube. Here are pictures, if you're too lazy to look up the song. The point is the hilarious modernized and impractical 18th century underwear. The music video also includes some men in relatively 18th century coats and wigs. I'm not sure if they count as props or fashion acccessories, but something like that. 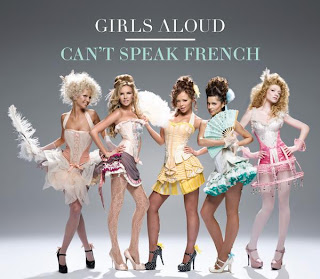 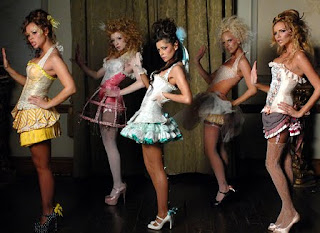 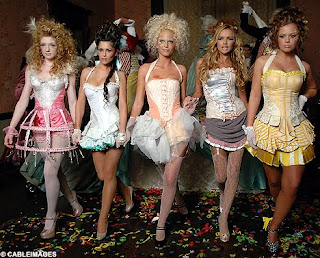 Isn't that entertaining? It makes me want to wear candy colored underwear all the time. Or something.

Clearly these are not good reproductions of 18th century corsets and underwear, but they are a lot of fun and draw inspiration from the very well-dressed Marie Antoinette. I think the weirdest thing is the cage hoop. I love it, but... why is it round? 18th century, and this is clearly meant to be, is all about the wide hips. I would understand some lovely cage panniers... some kind of oval shaped contraption... but round? I love it anyway, but it makes no sense to me.
Posted by Antonia Pugliese at 11:47 AM